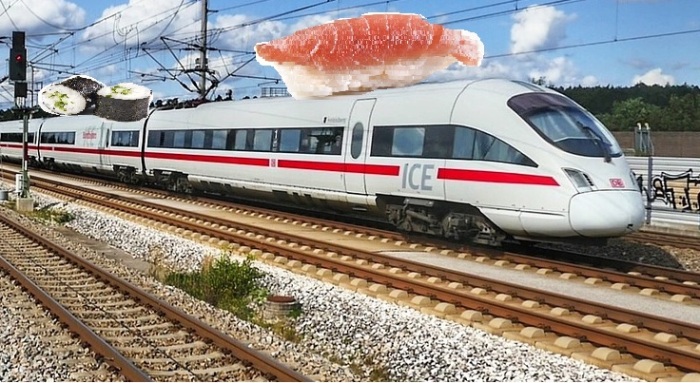 The government has commissioned a feasibility study to look into the construction of a Very Fast Sushi Train down the eastern seaboard, raising hopes that sushi aficionados in Brisbane will be able to sample a frilled scallop nigiri that has been prepared less than five hours earlier in a Melbourne kitchen.

“A whole new line would have to be constructed at a cost of $15 billion as sushi trains in Victoria run on a different gauge to those in New South Wales,” said chief engineer Brenda Hosomaki. “The biggest technological challenge is figuring out how to stop centripetal forces from wrenching the teriyaki chicken off the top of those little oblongs of sticky rice when the train is taking a curve at over 450 kilometers per hour.”

A hi tech form of seaweed inlaid with fibres of a special edible Kevlar like that used on France’s Sushi Train a Grande Vitesse (STGV) will be used to keep the spicy mayo and tuna ships in one piece.

But not everybody is enthusiastic about the project. Wagga Wagga farmer Trevor Gumboot is sceptical that the train will ever become a reality.

“They promise us a Very Fast Sushi Train at every election but everyone knows this is just roast pork aburi barrelling,” said the disgruntled grazier. “The distances in Australia are simply too great to make it economically sustainable. It’s all good in Japan where it’s only fifteen minutes from Tokyo to Osaka, but no-one wants to eat a prawn that’s been sitting in 400C for five hours in the Aussie sun. I’ve seen a study that shows up to 70% of the product will be eaten by cockatoos before it reaches Albury.”

Consulting firm Deloites estimates that a standard selection on a little round plate with the yellow coloured rim will cost a whopping $128 without any form of public subsidy. Chef’s special black plates will cost $500 each.

Like Loading...
‹ Fred Nile In Talks To Star In Weekend At Bernie’s 3
Barnaby Tells The Greens: Parliament Is No Place For Secret Relationships ›