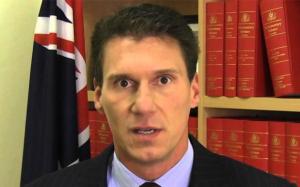 A teary Cory Bernardi has spent the whole weekend in his tracky dacks working his way through a double sized packet of Tim Tams and watching Pretty Woman on Netflix after learning that the media is just not that into him.

“I really thought this was it, the media was the one and we were going to be together forever,” said a blubbering Conservative Party leader as he sipped the last of a bottle of red and hugged the doona closer. “The media tried to tell me its thing with that hussy Mark Latham was over years ago and not to worry, that it just went around to his place to talk, and then I open the papers and there’s Mark Latham all over the media.”

“Cory leapt up in hope every time the phone rang but it was all wrong numbers and opinion polls,” said Bernardi’s flatmates Dennis Hood and Robert Brokenshire. “We offered to take him out dancing on Saturday night and kept telling him that he was beautiful and could do a lot better than the Australian media. We suggested he give Crikey a call but Cory said no, he only wants to be seen with the real media.”

Bernardi fell asleep late on Sunday night clutching an old copy of the Adelaide Advertiser to his chest whilst listening to “Not Pretty Enough” by Kasey Chambers on his i-pod.