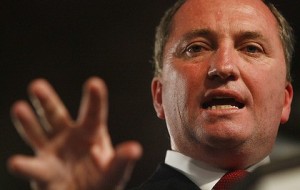 A defiant deputy Prime Minister Barnaby Joyce has escalated his ongoing feud with Malcolm Turnbull by pledging to bang a Staffer on the Prime Minister’s own desk.

“The Australian public and more importantly Australian businesses don’t want to hear about their Government’s private life,” said Barnaby Joyce. “And they definately don’t want their politicians to not be getting any. So to those calling for my reisgnation I say get stuffed and to Malcolm’s bonking ban I say I’ll be in your office this arvo with my pants down.”

“Make sure to clear your desk top of any letter openers or drawing pins.”

When reached for comment the Prime Minister said of Barnaby Joyce’s plans: “I am loathe to tell the leader of the National’s what to do. However he will have to find another office to copulate in as mine is being painted this afternoon. Might I suggest he try George Christensen’s office as I hear he is off to the gun range this afternoon.”

Opposition leader Bill Shorten said of Barnaby Joyce’s bonking plan: “If he does bang a Staffer on the Prime Minister’s desk he needs to ensure that he gives the desk a good clean afterwards. As that will be my desk later in the year.”

Like Loading...
‹ George Christensen Not Coping With Mum And Dad Fighting
France Makes Affairs Between Ministers And Staff Compulsory ›